Our wind turbines contributed to reducing greenhouse gases equivalent to taking 100,000 cars off the Capital Beltway. 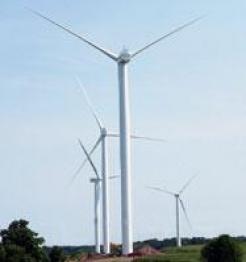 WSSC Water is committed to protecting the environment for generations to come. We are a Green Power Partner of the US EPA.

From 2008 - 2017, WSSC Water used electricity generated by a wind farm in southwestern Pennsylvania equally approximately 65,000 megawatt (MW) hours of power per year. Fourteen turbines generated this electricity, each producing 2.1 MW. This use of wind power contributed to the reduction of greenhouse gases released into the Washington area by 38,000 tons per year. It is the equivalent of taking 100,000 cars off the Capital Beltway.